"Volleyball has given me so much in my life and I am so grateful to have found it and been able to play it. I want to help enable everyone, regardless of their socioeconomic status, to have the same opportunity." - April Ross 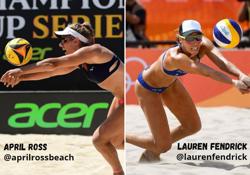 Two "stars" of the sand have stepped up and shined their bright light on Starlings Volleyball, USA at the 2020 AVP Champions Cup tournament series.  Olympians April Ross and Lauren Fendrick are both passionate about giving back and publicly support numerous causes.  April and Lauren have chosen to support Starlings Volleyball, USA because they know, through personal experience, what a positive impact volleyball can have in the life of a young girl...

"Volleyball has given me so much in my life and I am so grateful to have found it and been able to play it," says April. "I want to help enable everyone, regardless of their socioeconomic status, to have the same opportunity. The lessons learned and bonds made playing this sport have been so valuable to me and I know the same can be said by many who play or have played."

April and her partner, Alix Klineman, pledged to donate $5 per kill to their chosen Non-Profits over the past two AVP Champions Cup tournaments.  They offer special prize incentives to anyone who donates, especially those who match their donations. The public support and call to action from April and Alix has generated almost $7,000 in funds raised up to this point.  This weekend, April and Alix have pledged to donate $20 per ACE!  These donations will directly support the Starlings Players Fund, a financial assistance program designed to help supplement Starlings Club Player fees for those in greatest need.  Find information about how to donate and win special prizes by visiting April's profile on Social Media (info below).

April and Alix, also known as the "A-Team," have won both Champions Cup tournaments leading up to this weekend, taking down the top Canadian Team of Sarah Pavan and Melissa Humana-Paredes along with many other top-level teams.  They will enter this weekend's tournament as the #1 seed in hopes to sweep the entire AVP Champions Cup series.

2016 Olympian and current Stanford Beach Volleyball Assistant Coach, Lauren Fendrick, hopes to be the team to finally take down the reigning champs this weekend and win the last tournament of the series.  Last weekend, Lauren fought her way through the Qualifying Bracket and made it to the Semi-Final match before she was ultimately eliminated by her previous teammate and long-time friend, April.   On Saturday, August 1, the two teams will play their First Round match simultaneously on Court 1 (April) and Court 2 (Lauren) at 10:15 am Pacific.  If all goes according to plan, their teams will battle it out in the Quarterfinal match at 2:45 pm. Visit www.avp.com/brackets to follow their tournament progress.

While they may compete against each other on the sand, the two of them share a love for volleyball and use their platforms to shed light on issues they are passionate about.

"I wanted to represent Starlings because exposure to sports is so important for young women on so many levels and they are doing such a great job of making volleyball accessible for young women in at-risk communities. Volleyball is such a great way to teach leadership, teamwork, self-confidence, discipline, and communication," says Fendrick, who plans on getting even more involved with Starlings once this tournament series comes to a close.  "I'm honored to be highlighting this great organization this week and I'm excited to hopefully partner up for some beach clinics in the future."  Fendrick has also pledged to donate $5 per kill this weekend to Starlings.

The Starlings Volleyball, USA organization could not exist without our partners and supporters.  It's because of people like April and Lauren that we are able to provide equal opportunities for girls from diverse, lower socioeconomic communities to train and compete in a save environment.  Every dollar makes a difference in the lives of these girls.

Learn more about how you can help Starlings Volleyball, USA in our mission to positively impact the lives of at-risk girls through the sport of volleyball by visiting www.starlings.org/playersfund. 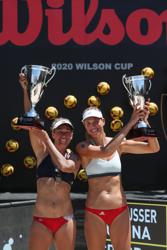 If you donate and want to be entered to win prizes, send your donation receipts to AprilRossBeach@gmail.com 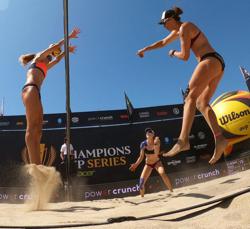